Growing up in the 80s & 90s, ‘The Bloomsbury Set‘ always sounded like it should have been a post-punk/shoegaze/indie band rather than a genre of English literature.

While I regard them, to some extent, as navel-gazers, excited by the sound of their own fame to some degree, there are elements of them that should interest us from a naturist and/or nudity perspective. I’ve read quite a bit of Virginia Woolf and found her work dull and uninspiring. Ditto E.M Forster. I’m just not that interested in tales of the Raj or British colonialism.

Rupert Brooke, on the other hand, is one of the few poets I can read for ‘pleasure’. I’ve written the word ‘pleasure’ in quote marks because a man describing the horrors of the First World War can’t really be described as pleasurable, but he certainly writes poetry that still has a resonance today in the way that many other poets don’t.

Brooke would write about WW1, and subsequently die in it, oddly not as a direct result of war, but of sepsis developed from a mosquito bite. Nevertheless, he left behind an important body of work.

What should interest us is a 1911 event wherein Brooke & Woolf went skinny dipping.

Where their influence is important for me as a naturist is how, deeply their ‘artistic’ nature embraced a casual approach to nudity, at a time when Edwardian England was still seen in the prism of the Victorian attitudes that preceded it. 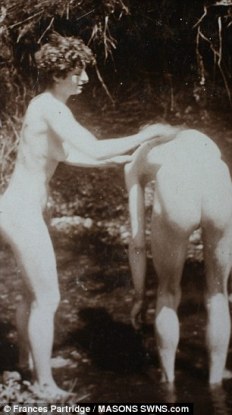 Virginia Woolf married, eventually, although for many years she also had a love affair with fellow Bloomsbury acolyte Vita Sackville West, and in the environs of this ‘set’, their lesbianism (or possibly more accurately bisexuality) was part of their ‘edginess’ as a group of literary note.

Today, Sackville-West is less known in Britain for her literary work as she is for the creation of gardens at Sissinghurst, in conjunction with her husband. Set in Kent, I’ve visited these gardens and they’re one of England’s lesser known treasures.

There’s a casual, blasé approach to nudity amongst the Bloomsbury Set, and for that we must be grateful. While I’ve not adopted a century-old hairstyle for photos, I have been posing (pearls and nothing else) for Harry in recent days. A couple of suitably posed ‘vintage, Bloomsbury set’ photos should appear over the weekend when our ‘vintage season in SL’ catches up with our promotion of vintage naturism.